Two so-called Anchor Handling Tug Supply (AHTS) vessels are to be converted into among the most powerful salvage tugs in the world. 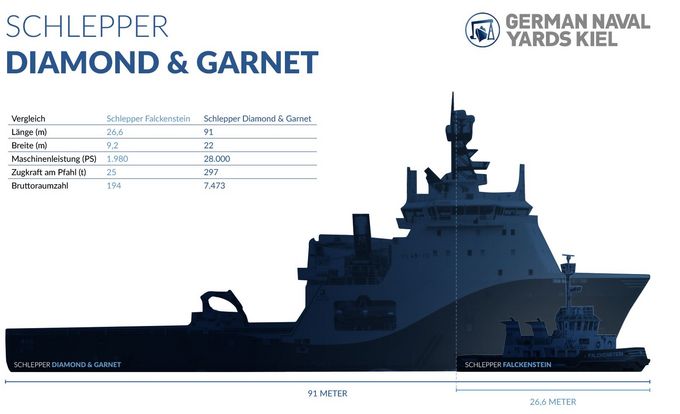 Contribution to the maritime circular economy

Kiel. With the selection from more than ten European competitors for the conversion of two high-performance tugs, the Kiel shipyard German Naval Yards (GNYK) has landed a major project and at the same time is making a contribution to the sustainable maritime circular economy in Europe. The two ten-year-old vessels were previously used to support offshore platforms. After the conversion, which will take about six months, the ships are to be used multifunctional by the French navy as emergency tugs and lightships as well as a maritime sick bay.

The ships, currently sailing under the names "Garnet" and "Diamond", were previously in service for the Norwegian offshore company "Siem" and are expected in Kiel this week. They are 91 meters long, reach a speed of more than 17 knots and have environmentally friendly hybrid propulsion.

After the conversion, the two ships will be among the most powerful salvage tugs in the world.

The commissioning is planned for the second quarter of 2022. The client is the French company Les Abeilles International.

Jörg Herwig, CEO of the German Naval Yards in Kiel, on the significance of the order: "Conversion instead of new construction - this approach will become increasingly important in the future in terms of a maritime circular economy. Extending the service life of ships by converting them for new tasks is thus also a contribution to the careful use of resources. We are observing in the civil business that more and more clients are asking for conversions rather than newbuildings for economic and environmental reasons. Conversions are no less demanding and complicated than newbuildings. As an international shipyard group, to which also belongs the French naval shipyard CMN in Cherbourg, we are proud to have won such a demanding project in this international competition. Here in Kiel, we are able to implement such projects with both our skilled workforce and our infrastructure."

Samira Draoua, President of Les Abeilles International, says: "This transformation project is a real industrial challenge. Among the many high-quality offers we received, our choice was GNYK, whose industrial capacities, guarantees in terms of deadlines and quality, as well as environmental commitments, were preponderant.” 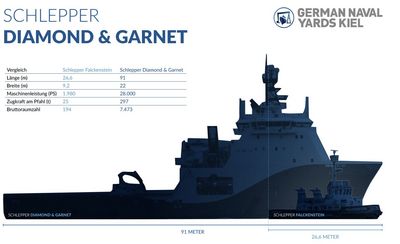