Ready for operation again: On Monday, September 4th, 2017 the German Navy combat support vessel “FRANKFURT AM MAIN” (A 1412) type EGV 702 (so called “Berlin-Class“) left the dry dock of GERMAN NAVAL YARDS Kiel. Here, on the site of the sister shipyard in Kiel, NOBISKRUG’s repair team has been repairing a stern damage on the 174 m long Navy ship for approximately ten weeks. Beside the extensive steel works – approx. 40 t of steel had to be exchanged – NOBISKRUG executed further maintenance and pipe works which were also due. Again, the shipyard proved that projects can be successfully realized within the given time and budget. 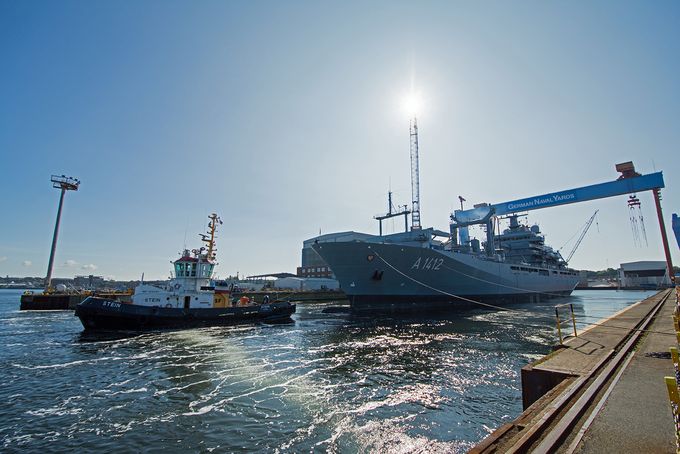 One aspect was important to the Director of the Repair Department, Bernd Wittorf: “The Navy urgently depends on the support vessels within their numerous operations and NOBISKRUG understood the significant task by delivering the “FRANKFURT AM MAIN” fully operational and in due time after the extensive repair works.”

At the end of May the NOBISKRUG shipyard, as part of the GERMAN NAVAL YARDS Group, received the order for the repair works; two weeks later the combat support vessel arrived at the 426 m long dry dock in Kiel. Built in 2002, with a displacement of more than 20,000 t the support vessel is one of three the largest vessels of the German Navy that ensure the extensive supply of units at sea. After termination of works the Navy ship was on schedule ready for departure on 31st August 2017.

Wittorf explained the shipyard’s thorough check of the vessel beforehand ensuring that the infrastructure allows the repair works and other orders would not threaten the stipulated settlement.
“For this time-sensitive projects, we always rely on our shipbuilding expertise and on our efficient infrastructure in Rendsburg and Kiel, together being able to handle such extensive orders on large ships”.

Christian Jenß, Project Manager of NOBISKRUG, was delighted about the successfully finished project: ”A significant contribution was surely the uncomplicated cooperation of all involved parties – within the yard group with our colleagues from Kiel as well as with the suppliers and the Navy.” All of them have successfully pulled into the same direction. “FRANKFURT AM MAIN” is now ready again for future operations on sea.”

As part of the Auxiliary Squadron of the 2nd Flotilla, the German Navy Support Vessel (EGV) “FRANKFURT AM MAIN’S” homeport is the naval base in Wilhelmshaven. The general data of the ship is as follows: 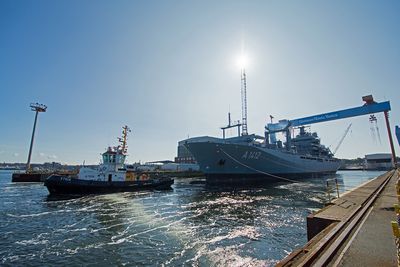 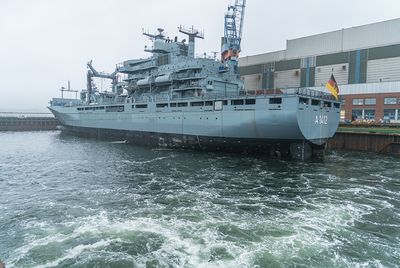