Daniel Günther: Shipyards in Germany are significant for security policy

Iskandar Safa meets with Schleswig-Holstein’s Minister of Economic Affairs Dr. Bernd Buchholz and Minister President Daniel Günther. The main topics of the discussion included the importance of the naval shipyards in Germany and the future plans of German Naval Yards 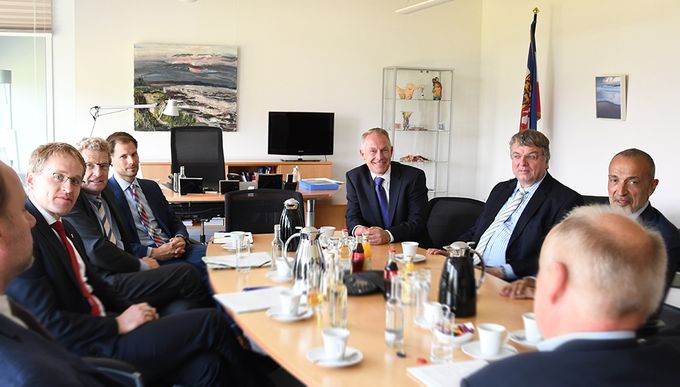 During his meeting with Iskandar Safa – chairmen of Privinvest Holding and owner of the Kiel shipyard GERMAN NAVAL YARDS – Schleswig-Holstein's Minister President Daniel Günther emphasized the strategic and security policy significance of shipbuilding and shipyards in Germany: "The security policy relevance of the existing shipyard infrastructure, especially on the Baltic Sea coast, is not discussed enough in the political debate.” Germany needs its naval shipyards not only as employer, but also for security policy reasons. ”And this means that major contracts in naval shipbuilding should be assigned domestically", said Günther, adding: "We should therefore make military shipbuilding a key technology again.”

Günther expressed his satisfaction regarding the development of GERMAN NAVAL YARDS over the recent years. In this time, the Kiel-based company has developed into a strong player within German shipbuilding and intends to further expand its position. This was pointed up by Mr. Safa during the meeting with Schleswig-Holstein's Minister President and Minister of Economic Affairs Dr. Bernd Buchholz (FDP). In the round of talks in the Kiel State Chancellery, Safa also mentioned the management of the company's naval division. A few weeks ago Jörg Herwig, an experienced shipbuilding manager, joined the management of GERMAN NAVAL YARDS KIEL (GNYK). "Complementing the personnel marks the next stage in the development of our naval shipbuilding division," said Safa. The company already makes a substantial contribution to creation of value in Germany. "However, we aim to continue growing," Safa affirmed.

Minister of Economic Affairs Dr. Bernd Buchholz praised the economic development of the shipyard group and the commitment of Mr. Safa. "Mr. Safa has shown a lot of perseverance over the years. He has turned a bankruptcy estate into a sustainable company," said Buchholz. The Minister of Economic Affairs was pleased to note that GERMAN NAVAL YARDS KIEL qualified for the final round of the tender of the German Armed Forces for the construction of multi-purpose combat ships of the type MKS 180. The Schleswig-Holstein-based company is the last remaining German general contractor in the European competition. 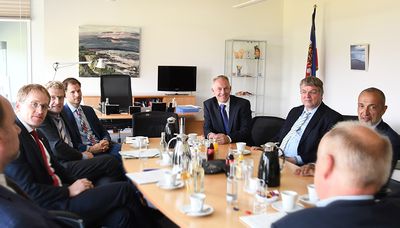